A new review of The Last Jazz Fan and Other Poems

“. . . I expect each reader will find something special and amazing in the poems within this collection. ”

Here’s how “The Poem I have Yet to Write” – one of the poems included in my new book, THE LAST JAZZ FAN AND OTHER POEMS – came to be. People seem to be reading it many different ways, but – for me – it began as a tongue-in-cheek response to a comment by the late, great Philip Levine, who said:

“One of the aspects of my own poetry I like best is the presence of people who don’t seem to make it into other people’s poems. Much of our recent poetry seems totally without people. Except for the speaker, no one is there. There’s a lot of snow, a moose walks across the field, the trees darken, the sun begins to set, and a window opens. Maybe from a great distance you can see an old woman in a dark shawl carrying an unrecognizable bundle into the gathering gloom. That’s one familiar poem. In others you get people you’d sooner not meet. They live in the suburbs of a large city, have two children, own a Volvo station wagon; they love their psychiatrists but are having an affair with someone else. Their greatest terror is that they’ll become like their parents and maybe do something dreadful, like furnish the house in knotty pine. You read twenty of those poems and you’re yearning for snow fields and moose tracks.”

So, here’s what I wrote:

The poem I have yet to write

will arrive
fully formed
except for one small
truth tucked into
the smoky recesses
of the unexpected
caesura that waits for you
somewhere beyond
the deep green pond
that cools
the second stanza
and gives up
rippling reflections of
an image we encountered
in the first in which
a solitary figure
can be seen casting
cerulean sensibilities
across a meadow
where wildflowers
and metaphors bloom
like approximations
of redemption or like
tiny epiphanies
bursting into flame
among the spindle trees.

The Last Jazz Fan and Other Poems reviewed on CompulsiveReader.com

“It’s one of those sweet sax solos disguised as a book of poetry, trilling down with ease into the marrow of your bones.

“Kenneth Salzmann may be a musical guy enthralled with jazz, but in this instance music is really a metaphor for poetry. He is a poet. I’m a fan of poetry like his. It’s as simple as that–and as messy. You see, his poetry really does creep into the bones, the marrow, the blood.”
—Jan Peregrine, Compulsivereader.com

See this #AmazonGiveaway for a chance to win: The Last Jazz Fan: And Other Poems (Kindle Edition).

The Last Jazz Fan and Other Poems, a collection of recent and selected poems by Kenneth Salzmann, is now available from Amazon.com and other major online booksellers.

The book has drawn praise from such literary notables as the iconic poet-novelist-activist Marge Piercy, who said, “Salzmann is a rare poet who can draft excellent and moving poems about nature and politics, about love and place, about old age, spirituality and friendship.

“You can feel in the poems the intelligence of the mind that created them and the compassion and wit of the poet.”

Novelist and short story writer Lucia Nevai, a recipient of the Iowa Award for Short Fiction and the author of Seriously (Little Brown) and Salvation (Tin House), said of The Last Jazz Fan and Other Poems, “Here is a mind unfairly comfortable with paradox, be it intellectual, emotional or spiritual — and a heart-breaking voice that is up to the task.”

The Last Jazz Fan and Other Poems contains 31 poems and retails for $10.95.

from the world one night

notes of a trumpet solo

at closing time. Some say

at the exact moment rhythm

when the last jazz fan

the darkness. Some say

it is the silent spaces between

that describe the song,

but some say the spaces

they swallow the song

and silence is certain.

from the world one night

notes of a trumpet solo

at closing time. Some say

at the exact moment rhythm

when the last jazz fan

the darkness. Some say

it is the silent spaces between

that describe the song,

but some say the spaces

they swallow the song

and silence is certain.

“On the Day of the Dead”

I’m pleased to have my poem “On the Day of the Dead” included in the new issue of Antiphon in both text and audio.

It just didn’t seem fair, the way those experts dissed the catbird on a public radio program I happened upon.

I assume they were correct in saying he’s only a mimic, but isn’t it the case in song that interpreters can matter every bit as much as originators, and quite often surpass the composer in mining the music? How else would you explain, say, Ella Fitzgerald?

So, here’s what I had to say to those opinionated birders, in a poem now appearing in the Winter 2016 issue of WestWard Quarterly (print only). 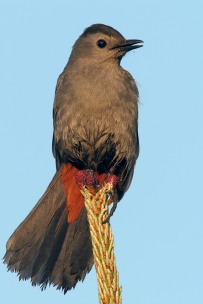 and say again the catbird lacks a song of its own

to broadcast from the crest of a winterberry tree.

In some way the critics know nature’s error of orchestration

that leaves this bird only to sample the proper sounds

of the wood thrush the magnolia warbler the red-eyed vireo

even the spring peeper, even your neighbor’s lawnmower.

In some way they know that the catbird’s mews

and whistles and squeaks, nasal moans and throaty

gurgles, count only as illegitimate borrowings from

the walls of sound that delimit his woodland home.

But we lack such certainties and, for the gift of lacking,

we still can make with innocent wonder the critical mistake

of marveling at the catbird’s discredited scatted inventions.

Why not every poem is a sex poem

Okay, here’s the story. Early last summer, I was one of 12 participants in noted novelist/poet/activist Marge Piercy’s annual juried poetry intensive. On a day when we were charged with writing a poem using a single extended metaphor, about half of the people in the workshop showed up with freshly-minted sex poems. Sex lends itself to metaphor, after all. I wasn’t a part of that half, but I couldn’t help but write this for the next session. Then my filmmaker friend Ronn Kilby decided to work on it as well . . .

Why not every poem is a sex poem

Some poems are theological, in a biblical sense.

Some are heroic tales of gland-to-gland combat.

Some political poems turn on a joint session of congress.

A poem can be about completing the jigsaw puzzle,

sharpening a pencil, parallel parking, or exploring a mine shaft.

A poem can be about checking the oil, churning the butter,

jumping the turnstile, planting a parsnip, or disappointing the wife.

You’ll discover many poems about putting bread in the oven,

plowing through the bean field, passing the gravy, whitewashing

the picket fence, peeling the tree bark, or taking Grandma to Applebee’s.

So why did you think sex has to be the thrust of every poem?